At the Kilns: A Defense of C.S. Lewis

When I was at Bible college in Alberta, a dear friend of mine saw me reading Mere Christianity. Even though C.S. Lewis was not on any of the course reading lists for that year, I was simply reading it for the edification of my soul. The effect Lewis’s writing had on me was nothing short of transforming. So, like anyone who enjoys something, I enthusiastically told my friend what I was learning. To my surprise, my friend responded that I should be cautious reading C.S. Lewis. Apparently Lewis held some strange beliefs. Well, I kept reading Lewis… for the edification of my soul. And, I later discovered, Lewis did hold to some strange beliefs, which become apparent when scrutinizing his lesser known works and the occasional private correspondence. Nevertheless, I have (and continue to be) tremendously blessed through the writings of C.S. Lewis… and so have millions of people around the world.

Without doubt, Lewis was a born-again believer in the Lord Jesus Christ. Did he have all his theological ducks in a row? No. Do I? Probably not. Do you?

The fact that Lewis’s life has undergone so much scrutiny, I am surprised there is not more so called “dirt” that is discovered. On the contrary, the testimony of those who knew him is consistent with his public confession as a believer in Jesus Christ. The resounding affirmation of real and sincere Christianity lived out in his life comes from fellow believers and unbelievers alike—close friends, acquaintances, students, colleagues and correspondents (Lewis wrote over 3400 personal letters to people around the world).

Part of the alarm and concern about Lewis is the overwhelming acceptance and popularity of his writings among evangelicals and non-evangelicals, Papists and Mormons. The problem with this line of argument is that we would have to disregard the Apostle Paul's writings as well. 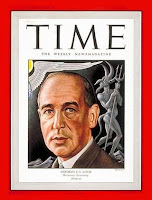 Some critics accuse Lewis of going too far in his orthodox convictions. When C.S. Lewis was featured on the cover of Time magazine in 1947, the accompanying article records that Lewis “is one of a growing band of 'heretics' among modern intellectuals: an intellectual who believes in God… not a mild and vague belief, for he accepts ‘all the articles of the Christian faith.’” On the otherhand, some "hardliners" accuse Lewis of not going far enough is expounding Christian orthodoxy. However, I think what they really mean is, Lewis does not expound their preferrential doctrinal nuances as gospel truth. Explaining his role as an apologist, Lewis states: “We are defending Christianity; not ‘my religion.’ When we mention our personal opinions we must always make quite clear the difference between them and the Faith itself.” The proof is in the pudding. The simple fact is that Lewis's writing has pointed many to Christ, not the Church of England.

Recently when I came across harsh criticism and condemnation of Lewis, I felt a pang of hurt in my soul. Here is an excerpt of what I read: Mary Van Nattan, who, in her article, “C.S. Lewis: The Devil’s Wisest Fool,” writes, “John F. Kennedy, C.S. Lewis, and Aldous Huxley all died on the same day. They all went to the same place”—i.e., “hell.”

Reflecting on this sensation of hurt, I wondered why I would react to criticism of Lewis. The answer, in Lewis’s words, is “The Church is the Bride of Christ. We are members of one another.” We are members of one body, Christ’s body. To read a “damning” article or hearing a harshly critical report about a fellow believer in Christ should cause all of us who believe in Christ to feel a sense of pain and disappointment. We are called to “build one another up” (1 Th 5:11) and we are warned not to “judge” (cf. Mt 7:1ff, Ro 14:4-10ff).

The BBC described to Lewis “the sharp division [he produces in his] audience: they either regard [him] as the cat’s whiskers, or as beneath contempt.” C.S. Lewis’s response was simple: “The two views you report aren’t very illuminating about me perhaps. About my subject matter it is an old story, isn’t it? They love or hate.”

The Apostle Paul writes in 2 Timothy 4:8, “In the future there is laid up for me the crown of righteousness, which the Lord, the righteous Judge, will award to me on that day; and not only to me, but also to all who have loved His appearing.” I thank God for being the righteous Judge and I thank God for C.S. Lewis, who sincerely and wholeheartedly loved “His appearing.”
Posted by Jeremy W. Johnston at Friday, May 16, 2008

Labels for the tulgey wood: C.S. Lewis, The Kilns

Yeah. I heard that Bob Jones was quoted, after meeting Lewis, "That man smokes and that man drinks, but I do believe that he IS a Christian!" It's the Church Triumphant!

What?! He smokes and drinks! Shocking!

This reminds me of my early days as a Christian. I worked at a summer camp as the (not-so)"handy" man. I was cutting the grass for the first time with the lawn tractor... in high gear. I was spotted by an old camp curmudgeon, who hobbled down to the field where I was zooming along. I greeted him with youthful exuberance (peppered with charming naiveté). He simply stood there, his chin quivering and his brow furrowed... Then he said with deliberate emphasis on each word: “Do you go to church?!” Apparently if I did go to church, then I wouldn’t be cutting the lawn in third gear. I assured him I did go to church and I immediately repented of my wanton and reckless lawn mowing. I am grateful I am saved by grace.