So many poets, so little time...

Last Sunday, I began a seminar series at my church called “The Christian and Literature.” I attempted to make a case for Christians fostering a poetic imagination and viewing the world as “story”—God’s story.

This Sunday, I will continue the series by looking at poetry. John Piper writes, “Imagination is like a muscle. It grows stronger when you flex it. And you must flex it… Imagination is also contagious… So I suggest that you hang out with people (mainly dead poets) who are full of imagination.”

Piper recommends Christians spend time with some dead poets. So, that is the plan. Some dead poets I hope to take a look at are Isaac Watts (who penned over 700 hymns), George Herbert (one of C.S. Lewis’s favourite poets), John Donne, John Keats, William Blake, William Wordsworth, Langston Hughes, Robert Herrick and a handful of others. We may also take a peek at Milton and an excerpt from Beowulf.

There is so much rich and rewarding poetry… where to begin?
Posted by Jeremy W. Johnston at Thursday, April 24, 2008 5 comments:

A new documentary is being released called Expelled: No Intelligence Allowed. The film tackles the one sided approach in academia to the evolution debate.

Ben Stein, who features in the film, said, "I have always assumed that scientists were free to ask any question, to pursue any line of inquiry, without fear of reprisal," Stein tells moviegoers. "But recently I have been alarmed to discover that this is not the case." He asks, "Darwin challenged the consensus view, and that's how we got Darwinism. If Darwin wanted to challenge the consensus today, how would he do it?"

To Focus on the Family, he goes on to say, "Why do we allow, even celebrate, dissent in every other area of society, but not here? I've found that people who are confident in their ideas are not afraid of criticism. So this tells me that Darwinists are afraid. ... Darwin was on to something gigantic. At the very least, he was on to changes within species. But whether there's ever been a provable observation of a new species being created, I don't think there has been. How did the whole thing start? How did the cell get so complex? Who created it all? Where did it come from?"

Check out the complete review on Plugged In.
Posted by Jeremy W. Johnston at Tuesday, April 22, 2008 No comments: 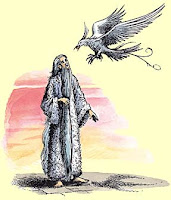 “Golly,” said Edmund under his breath. “He's a retired star.”
“Aren't you a star any longer?” asked Lucy.
“I am a star at rest, my daughter,” answered Ramandu…
“In our world,” said Eustace, “a star is a huge ball of flaming gas.”
“Even in your world, my son, that is not what a star is but only what it is made of.”

This past Sunday, I began a series called, "The Christian and Literature." The first installment focused on the need to foster a Christian (and poetic) imagination. Pastor and writer John Piper boldly states, “Imagination is not merely a device for writers, it is a duty for all Christians. We must exercise it or be disobedient.” We need to foster a poetic imagination for the following reasons:

(I) to widen our perspective of the world

There is more to understanding the world than mere "science"---although few would ever doubt the value and contributions of science in general, we live in a culture that believes truth can only be found in the material world. This is a narrow perspective the universe and it is certainly not Christian. The poetic worldview includes the scientific/literal, but encompasses the whole of human experience. Who can measure courage, love, friendship, beauty, leadership, sacrifice, duty? These things are as real as the leaves on the trees and the air that we breathe, yet they are nonmaterial.

The writer in Hebrews describes faith poetically: “Now faith is the assurance of things hoped for, the conviction of things not seen.”

(II) to begin to understand an infinite and nonmaterial God

In fact, the finite mind can only begin to understand the infinite God through poetic language, through a poetic imagination, an imagination that can comprehend “metaphor”: He is described as “King,” “Father,” “Brother,” “Husband,” “Friend,” “Lover.”

But God is NOT literally any of these things. God does not have a body, yet the Scriptures describe Him as having a face, ears, eyes, nostrils, mouth, hands, arms, fingers, shoulders, back, feet. He sits, stands, marches, rides, shoots arrows; his voice is like thunder.

(III) to grasp the mysteries of the gospel

Jesus chastises His disciples when they fail to understand His poetic language, confusing the "leaven" of the Pharisees with the literal leaven of bread (Matt 16-6-12); Nicodemus cannot comprehend being "born again" (John 3:3ff) and the Jewish people mistake the spiritual kingdom Jesus came to establish with a literal kingdom (John 6). These are just three examples where the people who walked with Jesus and heard His messages failed to understand the poetry of His statements.

(IV) to live out “The Golden Rule”

We need a poetic imagination to obey the golden rule: Douglas Jones points out, “In the case of morality, many thinkers have pointed to the fact that moral judgments involve the imaginative act of placing yourself in the other person’s place, the act of sympathy. Even the simplest, yet most profound commands—‘You shall love your neighbour as yourself’ (Mt. 22:39) and ‘love one another as I have loved you’ (Jn. 15:12)—require us to imagine one person as another, one situation in terms of another, Christ as us. That involves a profound and imaginative metaphorical transfer. And that has to be learned; the implications are very subtle.”

Cliche kills the imagination. Cliches are stale. They lack potency. They are old expressions, old images, old ways of saying truths. When original, they were powerful. When a phrase becomes commonplace, it losses it's ability to convey a full meaning. Christians should endeavour to break away from cliche and present the glorious truth of the God of all creation in new, powerful ways, ways that are worthy of the great God we serve. Francis Schaeffer writes, “The Christian is the one whose imagination should fly beyond the stars.”

C.S. Lewis wrote the Chronicles of Narnia in order to present the glorious truth of the gospel in a new way, without “stained glass and Sunday school associations.”

John Piper, in his essay, “God is not boring,” writes, “Imagination is the key to killing boredom. We must imagine ways to see great truths for what they really are. And they are not boring. God’s world—all of it—rings with wonders. The imagination call up new words, new images, new analogies, new metaphors, new illustrations, new connections to say old, glorious truth. Imagination is the faculty of the mind that God has given us to make the communication of His beauty beautiful… [and] helps us show the world’s horror as horrible.”

Christians must foster a poetic imagination, in order to “labor to say an old truth in awakening ways. God is worthy. ‘Oh sing to the Lord a new song”—or picture, or poem, or figure of speech.”

The Christian and Literature

Starting this Sunday night, I will present a four part series on "The Christian and Literature" to my local church. The first session will deal with poetry.

At the heart of this series is my hope to adequately answer the question, "Why should Christians read literature?" In short, literature fosters "imagination"---true imagination, God honouring imagination. Pastor and author John Piper writes, "imagination is not merely a device for writers, it is a duty for all Christians. We must exercise it or be disobedient."

Over the course of the four sessions, I hope to show the truth of this statement. I also hope to post some of what I will be saying in these sessions on my blog. Stay tuned!
Posted by Jeremy W. Johnston at Friday, April 18, 2008 No comments:

"...the hills are alive with the Sound of Music!"

I am in the middle of directing my school production of The Sound of Music. Or perhaps I should say, "the muddle of directing..." The show opens this Thursday night and runs until the Saturday matinee. THIS Thursday.

It should be a great show... there is only about three or four more months worth of work to be done. I only have two days...

I fear my wife and children have forgotten I still exist. I do! I do!
Posted by Jeremy W. Johnston at Tuesday, April 08, 2008 3 comments: