At the Kilns: Reading C.S. Lewis

Back in March, I started a blog series entitled, “At the Kilns”. The mantra of this series was “Learning from C.S. Lewis”; the plan was to immerse myself in the writings of C.S. Lewis. As this year draws to a close, I would like to review what I have read and what I still need to read before my yearlong endeavour concludes in March 2009.

At the Kilns: Learning form the Writings of C.S. Lewis
Books read in 2008

Fiction:
The Lion, the Witch and the Wardrobe
Prince Caspian
The Great Divorce

Lectures/Sermons/Apologetics:
The Weight of Glory
God in the Dock
Christian Reflections (nearly finished)

Letters:
selections from They Stand Together: C.S. Lewis to Arthur Greeves
Letters to an American Lady

On the list for the next three months, I propose the following (based on the recommendations of a well-read Lewis fan):

That Hideous Strength (from The Cosmic Trilogy)
Till We Have Faces

This will take me to March. I may also be able to fit in The Abolition of Man. There is still a sizable corpus of Lewis’ writings I have yet to explore. Most of the books I read this year are among Lewis' shorter texts; nonetheless, I will have a lifetime, Lord willing, to read and re-read more of C.S. Lewis. After March break, however, I will leave the Kilns and begin a series on Francis Schaeffer… “At L’Abri”. The Kilns won't be left behind completely, mind you. Lewis has a way of appearing on my reading list every year.
Posted by Jeremy W. Johnston at Wednesday, December 17, 2008 No comments:

Labels for the tulgey wood: C.S. Lewis, reading, The Kilns

God's answer to the Problem of Evil

We live in a dark and evil world. I am stunned every time I open a newspaper and glance over the headlines. Human creativity and ingenuity seems to be equally evident in the extent of our evil endeavours as well as our good endeavours. This is not pessimism; it is reality. Consequently, one of the most common objections to Christianity is the question of evil. “If God is supposedly good,” says the non-Christian, “then why does He allow evil to exist?” The dichotomy that is presented is this: either God is not strong enough to prevent evil or he is strong, but He is not good enough to want to prevent it. This objection is often called the Achilles’ heel of Christianity because it is perceived as a major weak point. There is no easy answer to this objection. Many scholars and theologians have contorted themselves and the Scriptures, often to the destruction of sound doctrine, in order to give an answer to this challenge.

As Christians and non-Christians consider this issue, we need some perspective. Dorothy Sayers, as quoted in A Ready Defence by Josh McDowell, writes

For whatever reason God chose to make man as he is—limited and suffering and subject to sorrows and death—[God] had the honesty and the courage to take his own medicine. He Himself has gone through the whole human experience, from the trivial irritations of family life and the cramping restrictions of hard work and lack of money to the worst horrors of pain and humiliation, defeat, despair and death. When He was a man, He played the man. He was born in poverty and died in disgrace and thought it well worth while” (413).

It is essential to remember in our discussion of evil that God Himself endured His “own medicine” as Sayers puts it. Often times we blame God as though He was aloof from the mess of the world. He suffered the greatest evil. For some reason, He “thought it well worth while.”

As we celebrate the birth of Jesus Christ this season, let us remember that God did not leave the problem of evil unanswered. He gave us a saviour.

Labels for the tulgey wood: Christianity

Recently, I led a five-part study on the “Music and Spirituality of J.S. Bach, Handel and Mendelssohn” for Pilgrim Baptist Fellowship. Although I have a great appreciation for music, I am an amateur on the subject. So, in my preparation for this series, I listened to a number of compositions by these musical geniuses. I was struck by the fact that I rarely “listen” to music; I simply hear it. Most of us “listen” to music as background noise while we do something else. No piece made this point more clear than Bach’s St. Matthew Passion. I was profoundly and deeply astounded by the richness, beauty and power in the music. In fact, I was moved to tears at one point in the piece. Bach’s adept arrangement of music and lyrics was incredibly affecting.
Bach’s St. Matthew Passion was written in German, but I borrowed from the library a copy of the work in English. I was mesmerized by the piece. Up to this point in my foray into classical music, I underestimated the power of music. I think the greatest testimony of the power of music—particularly Bach’s Passion—can be seen in the life of Jakob Ludwig Felix Mendelssohn Bartholdy (1809-1847).

When Bach died in 1750, he was all but forgotten as a composer. He was more famous in his day as an organist and musician. Although he remained known among contemporary scholars of music, most considered his compositions far too difficult to play.

A young Jewish composer, Felix Mendelssohn, rediscovered Bach’s St. Matthew Passion about 70 years after Bach’s death. He was moved by the musical and dramatic aspects of the work; eventually, when he conducted an orchestra and choir of 400 to put on the Passion in Berlin in 1829, Mendelssohn was also deeply moved by the presentation of the gospel in the piece.

Mendelssohn’s parents had made a superficial conversion from Judaism to Christianity for economic and political reasons. Mendelssohn yearned for answers to his spiritual questions, but he only began to find direction 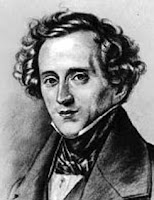 in the music of J.S. Bach. Ultimately his conversion to Christianity is a direct result of his contact with Christ through the music of J.S. Bach. In a time where Lutheran clergy had abandoned their first love and aligned themselves with the prevailing theological fads, Mendelssohn only had the Bible and Bach. Mendelssohn was anchored firmly in his faith; his subsequent spiritual growth was also aided by studying the life of Martin Luther and by his friendship to a young seminary student named Julius Schubring.