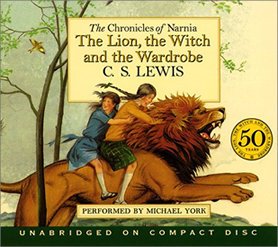 I am a big fan of the Fantasy genre, although I have only explored the works of George MacDonald, J.R.R. Tolkien and C.S. Lewis. I know the genre has exploded in the past fifty years. One reason for the popularity of Fantasy is the lack of ambiguity and haziness so often associated with modern and post-modern literature. In a world of wizards, dragons, hobbits and knights, there are clear lines of virtue, character and morality that our current cultural context yearns for. The success of the Lord of the Rings and the The Lion, the Witch and the Wardrobe films is an indication of our interest in clearly delineated roles for good guys and bad guys. A friend of mine who works at Chapters tells me that Lewis's Narnia books are still best sellers, even before the recent film. Our culture has become too cynical, and fantasy can act as an antidote for this disparaging attitude. The explosive success of the Harry Potter series underscores this interest among adolescents. Certainly fantasy should find a place in our English classrooms. In some respects, fantasy novels can be more real and authentic than a cynical, post-modern novel. Such texts could create very interesting discussion in an English classroom.
Posted by Jeremy W. Johnston at Thursday, August 31, 2006 No comments: 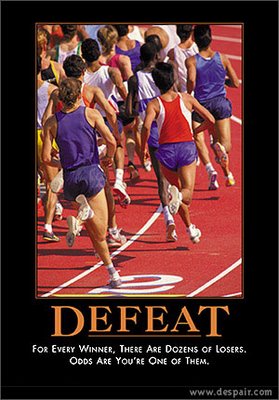 This is absolutely hilarious. Click here to view a fantastic new line of "Demotivator" posters. I am tempted to order a few for my classroom, but I think I would get into a lot of trouble. 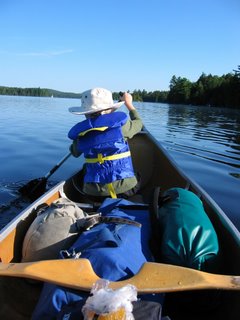 Last week, my 8-year-old son and I went on a three-day canoe excursion into the wilderness of Algonquin Park. We had a glorious time in God's Creation as well as celebrating my son's road to manhood. It was a challenge for him and he had responsibilities. I pondered how few responsibilites and challenges children have today, even my own son. It is no wonder so few grow up to be men who are willing to be faithful and responsible to their families and boldly face challenges. We live in an urban area, where water comes from the tap, food comes from the grocery store, fire comes from the stove and we drive to get where we need to go. In such a time as ours, it behooves us as fathers to create situations where life isn't so convenient. Even so, our little canoeing trip pales in comparison to the life of early pioneers. A few years ago, I read to my son a number of the Little House on the Prairie books by Laura Ingalls. I was painfully reminded how little I know about "work". If Pa Ingalls had been lazy or even mediocre in his work habits, then the Ingalls would have surely died on the American Frontier. There was also a greater dependency on God as Provider. The Ingalls lived off of the land; as God provided for them, so they had. From the books, I was also reminded how good and right it is for man to work. In Eden, God called man to work the garden. Paradise wasn't a wilderness; it was a garden that needed to be tilled, sown and reaped.

It is my prayer and active concern to point my sons towards the goal of manhood and encourage them in the calling God places upon them as men... men who know how to work, men who take hold of their responsibilities and men who are bold in the face of adversity... in other words, men who are like Christ.
Posted by Jeremy W. Johnston at Thursday, August 17, 2006 No comments:

I continue to dabble in the writings of Flannery O'Connor this summer, and last night during my son's soccer game (he wasn't on the field at the time) I read a fabulous essay on a subject near and dear to my heart. Here is a gem of a quote from Flannery O'Connor:

"Ours is the first age in history which has asked the child what he would tolerate learning, but that is a part of the problem I am not equipped to deal. The devil of Educationism that possesses us is the kind that can be cast out only by prayer and fasting. No one has yet come along strong enough to do it. In other ages the attention of children was held by Homer and Virgil, among others, but by the reverse evolutionary process, that is no longer possible; our children are too stupid now to enter the past imaginatively. No one asks the student if algebra pleases him or if he finds it satisfactory that some French verbs are irregular, but if he prefers Hersey to Hawthorne, his taste must prevail.

I would like to put forward a proposition, repugnant to most English teachers, that fiction, if it is going to be taught in the high schools, should be taught as a subject and as a subject with a history. The total effect of a novel depends not only on its innate impact, but upon the experience, literary and otherwise, with which it is approached. No child needs to be assigned Hersey or Steinbeck until he is familiar with a certain amount of the best work of Cooper, Hawthorne, Melville, the early James and Crane, and he does not need to be assigned these until he has been introduced to some of the better English novelists of the 18th and 19th centuries.

Yesterday while taking my son to swimming lessons, I managed to read a short story by Flannery O’Connor. She has been a topic of discussion recently with an issue of Credenda Agenda devoted to her and a brief mentioning on Dr. Haykin’s blog.

Flannery O’Connor was a Catholic writer who lived in the Protestant American South. Although I have significant theological qualms with Catholicism, I am very fond of the writing of three other Catholics: G.K. Chesterton, Graham Greene and J.R.R. Tolkien. Given my affinity for these Catholic writers, and after reading Doug Jones’ take on O’Connor in C/A, I decided to check out a collection of her writing from the local library.

To my delight, the story I read yesterday was remarkable. I have never been a fan of short stories; as an English teacher I have bumped short stories out of the courses I teach. But O’Connor seems to have perfected the art.

The difficulty I have with short stories is that they are “short”. Authors are limited in their ability to develop convincing and authentic characters or developing a sufficiently deep, rich and layered plot. Life is complex; short stories, because of their restrictive length are too simplistic—in terms of form.

In her story, “A View of the Woods,” O’Connor masterfully uses her economy of words to narrow her focus on one character. Good writers say more with less, and she has done this. The story is only twenty pages long, yet O’Connor draws in her reader into a deep and complex arena by using a number of ingenious techniques. The most profound is her use of narration. The story is told 3rd person limited omniscience—in other words, the story is told from a 3rd person perspective but the readers are only given access to one character’s personal thoughts (as opposed to 3rd person omniscient, where the reader has access to all the major character’s thoughts as well as actions). The result is effective. O’Connor “taints” the “objective” narrator’s perspective with that of one of the characters. This gives us a much deeper picture of the main character and enhances realism. In life we only have access to our own thoughts when we are trying to make sense of the world around us. O’Connor could have used first person to accomplish this, but instead she uses the façade of objectivity. This is highly appropriate because the lead character believes that he is omniscient and that only he sees the world objectivity and accurately, untainted by pedantic and small-minded perspectives of his family. The irony is, of course, that he is “limited” and he is “tainted”. Also, by using third person, O’Connor is able to expose this irony “inadvertently”—in other words, although the narrator is tainted by a limited perspective, it still must record events and dialogue as they occur. A first person narration has the liberty to “revise” the events recorded, forcing the reader to read between the lines.

She also uses vernacular very well; she not only conveys an authentic sounding Georgian accent, she also conveys “personality” through the speaking style of her characters. Her physical descriptions are brief but meaningful. She does more than paint a picture of her characters in the readers mind; she uses physical description to tell the reader something about her characters. The names are also important in this story. The protagonist is named Mr. Fortune and his ne’er-do-well son-in-law is named Mr. Pitts. She playfully yet unobtrusively uses these names to deepen the sense of irony in this story.

Most profound is her use of humor. The story was not a “comedy” at all, yet I did laugh out loud on a few occasions. Referring back to my comments about the limitations of short stories, O’Connor adds depth and authentic complexity by incorporating a range of human emotions in her story. Humor is a part of life in almost all circumstances. She uses it authentically and effectively.

Because of her Catholicism, O’Connor also “says” something from a grounded perspective. Unlike many of her contemporaries that write as though they are jelly fish awash in a sea of relativism, O’Connor is judging her character. He is a fool. He does the wrong thing. This “judgmental” perspective is not overt in the story; it is assumed. O’Connor assumes a Christian worldview, where there is such a thing as up and down. This is the heart of her authenticity. The world actually functions according to the Christian worldview. O’Connor is not attempting to preach a moralizing sermon. She is simply observing the world with the clarity of Christian understanding. Tolkien writes LOTR with this sort of depth. He too assumes a Christian worldview; as a result, Midde-earth is an authentic place in the reader’s mind. The reader can relate to the world of Tolkien and of O’Connor because it is a reflection of the world as it is.

Although my reading agenda is jammed packed this summer, I hope to squeeze in a few more O’Connor stories. I also think that more can be said about Catholic writers. Good writers, whether Catholic or not, observe the world with clarity and reflect it in their work accurately. The further removed a writer is from the Christian worldview, the harder it is for the writer to see clearly and retell accurately. When time presents itself, I would like to explore a Protestant Christian perspective on Catholic writers and their work.
Posted by Jeremy W. Johnston at Wednesday, August 02, 2006 No comments: