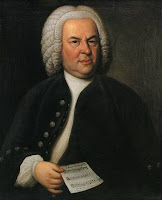 When describing the foundations of Western music, some music scholars refer to the three B’s—Bach, Beethoven and Brahms—while others would simply say, there was Bach… and then everyone else. Bach was a prolific composer, brilliant organist and an inventive musical genius. His ability to act both as a conservator and innovator of music is what places him at the top of the list of musical giants. In his works, he excelled at traditional forms of music while expanding and transforming the forms to new heights, achieving “summa”—highest realised potential—in nearly every style of music known in Bach’s day.

When Mozart first encountered Bach’s music, he was “entranced” by it. According to Harold Schronberg, Mozart studied Bach’s compositions, “arranged some music, and was strongly influenced by Bachian counterpoint.” Beethoven and Brahms were also influenced by Bach. Brahms said, “Study Bach: there you will find everything.” Mozart said about Bach’s music, “Now there is music from which a man can learn something.” After hearing a performance of Bach’s music, Richard Wagner described it as “the most stupendous miracle in all music.” German poet, Goethe, described Bach’s music “as though eternal harmony were conversing with itself, as it may have happened in God’s bosom shortly before He created the world.” Robert Schuman writes, “Playing and studying Bach convinces us that we are all numbskulls.”

With such praise, it is surprising to discover that this musical giant was a humble and gracious man who devoted his life and talents to the glory of God. Over three quarters of his (astonishing) one thousand compositions consisted of music composed for worship in the church. Many scholars balk at the notion that Bach’s perceived Christianity had anything to do with his music; J.S. Bach, however, states plainly that “The aim and final end of all music should be none other than the glory of God and the refreshment of the soul.” Soli Deo Gloria—To God Alone be the Glory. The letters S.D.G. were inscribed on many of Bach’s compositions; he meant this Latin phrase as a testimony to those who would perform his music and to generations to come, that this music was for God’s glory, not Bach’s. He strove to live by Paul’s words: “Whether you eat or drink or whatever you do, do all to the glory of God.” Even on much of Bach’s “secular” compositions, we find inscribed the letters J.J., for Jesu, Juva (Jesus, help) or I.N.J., which stands for In Nomine Jesu (In the name of Jesus).

The life, music and legacy of J.S. Bach is a reminder to all Christians to use the gifts and talents God has given us for the Glory of God and the building up of His Church. For Bach, there was no dichotomy between secular and sacred. Whatever he did, for whatever purpose, he did for his Heavenly Father. To God Alone be the Glory.
Posted by Jeremy W. Johnston at Saturday, October 18, 2008 5 comments:

As of late, I have been engaged with the start-up of the academic year. I am teaching Hamlet to my English students, The Odyssey to my Classical Civilization students and I am teaching about Roman poet Horace to my Latin students. I am delighted to say that I have a wonderful “batch” of students to work with this year.

In addition to school start-up, I am undergoing a crash course in music education. I have been busy researching and preparing a five-week study on the Spirituality and Music of J.S. Bach and George Handel for my church. Over the month of October, I will be presenting this series during the Wednesday Prayer meetings.

As a result, I have put my C.S. Lewis education on hold. My current foray into the world of music is incredibly illuminating. I am certain Lewis wouldn’t mind the short deviation from studying at the Kilns.
Posted by Jeremy W. Johnston at Sunday, October 05, 2008 2 comments: