Memorial Stones from the Jordan: Joshua 4

Opera isn’t realistic. Mortally wounded people “die” while singing a ten minute aria and gesturing dramatically over the entire stage. Huge, portly women are considered dainty and fair by many (often equally portly) love-struck suitors. Villains “sneak up” on victims while dramatically belting out songs and making all kinds of racket… noticed by no one except the audience. The “phoney” style of opera has no equal in any other theatrical medium. But, the point is good opera isn’t supposed to be realistic. It is symbolic. The renowned musicologist, Aaron Copland, writes, “One must be willing to allow that symbolic things mirror realities and sometimes provide greater esthetic pleasure than the merely realistic. The opera house is a good place in which to find these symbolic pleasures.” Not all opera is good opera or truly symbolic. As one opera aficionado recently pointed out to me, some opera is merely vehicles for narcissistic soloists seeking self-glorification. What I am interested in is good opera, symbolic opera, opera that offers the audience “symbolic pleasures”.

So good opera, then, is “real” but not realistic---real in that it attempts to mirror the full essence of “reality” by means of symbolism. In truth, no art is ever fully realistic; all art is symbolic on some level. Good opera---as an art form---simply embraces symbolism wholeheartedly. So the key to enjoying good opera is to realize that it attempts to function as “total art” surrounded by symbolism. Opera is “total art” because it capitalizes on all of its resources as an art form; at its disposal, opera has music, vocals, lyrics, costumes, sets, dance, acting, gestures and props to convey meaning. But “total” also in the way that it does not strive for realism nor does it expend much of its resources on believability; rather, nearly all aspects of the performance can be used in expounding meaning.

This recent epiphany came to me a couple of weeks ago when I attended the opera. Not an actual opera, per se, but a digital broadcast from the Metropolitan Opera to a Famous Players movie theatre. The broadcast was from a live performance---happening in real time---of Hamlet by the French composer Thomas. 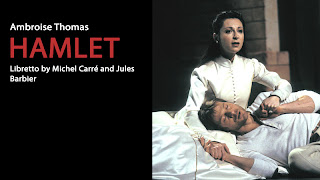 Watching opera, especially in the 21st century, seems like an odd way to spend a Saturday afternoon. Even with the 21st century technological innovations such as HD broadcasting and surround sound, reclining seats and lightly buttered popcorn, watching opera in a movie theatre seems even more unusual. But, in fact, it was an incredibly enjoyable experience. Admittedly, I probably wouldn’t have found myself there if it wasn’t for a former student and friend who invited me. He has been my musical mentor over the past two years as I slowly make a serious foray into the marvellous world of music. What he is helping me discover is that opera is not odd at all; rather, opera is, in many ways, the pinnacle of art.

Effective symbolism requires conventions, and opera is an art form that is thoroughly immersed in conventions. To fully enjoy opera, then, I need to become literate in operatic conventions. In other words, to fully imbibe the pleasures of “total art” and “symbolism,” I will need to learn how to listen, to see and to think---operatically. As I continue to learn from my former-student-now-teacher and friend, I look forward to greater “symbolic pleasures.”
Posted by Jeremy W. Johnston at Thursday, April 15, 2010 1 comment: