Why the best Allegory is Christian Allegory: III

Why Narnia is not Allegory

The first reason the Narnia stories are not allegory is because Lewis says they’re not allegory. Being a scholar of Medieval and Renaissance literature, he did not, ironically, like allegory all that much. His intention in writing the Narnia stories was to tell the Christian story without “stained-glassed windows.” Allegory would work to accomplish this but he wanted the freedom to tell Bunyan’s story while creating a new and different story. For example, the White Witch is a Satanic-like figure, but she is not "representing" Satan in an allegorical way (see comments on "How allegory works" on blog post below). The Witch is an evil sorceress who is inadvertantly brought into our world and then into Narnia by young Digory in the The Magician's Nephew.

The difference between allegory and Aslan is that Aslan actually is the Lion of Judah as he manifests himself in a different universe. He does not represent Christ, he is Christ in a fictional context. The parallel universe of Narnia that Lewis created is fictional, of course, but in the fictional reality of the novels, Narnia is as real as Lucy Pevencie’s England, and Aslan is as real as Christ. Narnia does not symbolize our world; it is an entirely different world all together. That being said, Lewis wasn’t attempting to create an alternative religion of Aslan-worship. His purpose was to lead his readers to the real Jesus Christ. In the 1950s, a concerned mother wrote to C.S. Lewis stating that her son “loved Aslan more than Jesus.” In a lengthy and delightful reply, Lewis writes, “But Laurence can’t really love Aslan more than Jesus, even if he feels that’s what he is doing. For the things he loves Aslan for doing or saying are simply the things Jesus really did and said. So that when Laurence thinks he is loving Aslan, he is really loving Jesus: and perhaps loving Him more than he ever did before.”

Next blog: Why Christian Allegory is the best kind of Allegory
Posted by Jeremy W. Johnston at Wednesday, July 26, 2006 No comments:

Why the best Allegory is Christian Allegory: II

How does Allegory Work?

In Pilgrim’s Progress (1678) the protagonist named “Christian” flees the “City of Destruction” and travels through the various literal places in the narrative that also carries symbolic meaning. He trudges through a slough called the Slough of Despond. While in the slough, Christian experiences despondency. Later, he travels to a city called Vanity Fair and encounters garish and vain citizens; he visits a Doubting Castle, and (you guessed it), he doubts. The culmination of his journey occurs when he finally arrives at the Celestial City. The entire narrative is a representation of the human soul's pilgrimage through temptation and doubt to reach salvation in heaven.

In an allegory, the various elements of the story systematically parallel other events on a spiritual, historic or literary level. This differs from allusions or symbolism. Tolkien’s The Lord of the Rings, for example, makes many allusions to mythological archetypes evident in the Christian story. Gandalf, Aragorn and Frodo are all Christ-figures, but the LOTR is not an allegory. The allusions and symbolism are not systematic, nor are they intended to reflect a hidden Christian message. Providence is not only symbolically but literally present in the story.

Harry Potter is also a Christ-figure, as is Neo from the Matrix and Superman in the current film Superman Returns. Although these works carry symbolic weight, they are not allegories. Harry Potter does not represent Christ on a spiritual level; he is merely an archetype of Christ. Even the many Christ-allusions in Superman Returns do not make it a Christian Allegory. Here’s a few interesting allusions… Superman was “sent to earth by his father” to be a “light to humanity” and act as a “saviour”—Superman is beaten and humiliated by Lex and his gang is a bloodless homage to Gibson’s Passion of Christ. Superman “dies” saving the world from the new kryptonite continent… as he hurls the rock into outer space, Superman descends to earth is a brief crucifixion pose. After his death, he is resurrected. All this does not make Superman an allegory. Ironically, C.S. Lewis’s Chronicles of Narnia is also NOT an allegory. More on that next time.

Next blog: Why Narnia is not Allegory
Posted by Jeremy W. Johnston at Tuesday, July 25, 2006 No comments:

Why the best Allegory is Christian Allegory: I 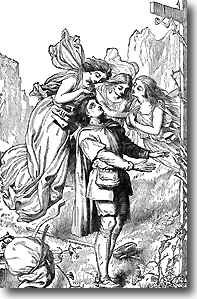 I would like to begin a series about allegory. The discussion recently came on church historian Dr, Michael Haykin’s blog, Historia Ecclesiastica, where he confessed to having not read Pilgrim’s Progress because of a dislike for allegory. I have always been partial to allegory, so I thought it would be fitting to write a bit about it in a seven part series entitled, "Why the best Allegory is Christian Allegory."

Allegory comes from the Greek word “allegoria” which translates as “speaking otherwise.” This concenpt is at the heart of what an allegory is. Essentially, an allegory is a piece of writing (poetry or prose) in which characters, events, and ideas in the piece represent something else on a symbolic level. The symbolism is systematic, functioning like an extended metaphor. In addition, an allegory usually conveys a moral lesson to its readers.

Among the most famous Christian allegories are such works as John Bunyan’s Pilgrim’s Progress and Spencer’s Faerie Queene. During the English Medieval and early Renaissance, allegory was a very popular moral and religious didactic form of literature. But allegory is not an exclusively Christian form of literature. The Greeks also occasionally wrote allegory. George Orwell’s Animal Farm is another famous allegory, as well as Swift’s Gulliver’s Travels. The latter two works expressing decidedly political perspectives.

An Odyssey in Reading

I have been reading Homer’s The Odyssey this summer. I will be teaching it in the fall. Usually I avoid work related reading during the ephemeral and fleeting summer months. However, I have been meaning to read this classic of Western literature for a number of years. I think my hesitancy to engage Homer was a result of my fear of the text. In the hidden depths of my being, I think I subconsciously perceived that The Odyssey and The Iliad were scholarly and enigmatic masterpieces that exceeded my ordinary and average cerebrum.

My subconscious, however, was wrong. The epic poem is a delight to read. It is very accessible and at times (surprisingly) very simplistic. I discovered that Homer was writing long before the absurd and truly enigmatic prose of the 20th century post-moderns. In stead of harping on complex and psychologically deformed anti-heroes of modern prose, Homer addresses themes and issues that ring true to the very centre of our humanity. As a Christian reader, I am given insight into a truly human hero, Odysseus, and I can compare and contrast this view with the truly divine Christ-hero.

Homer is not high brow. He is for the Everyman. Take up and read, Everyman.