To preach or not to preach...

When someone comes to a saving knowledge of Jesus Christ, he is compelled by a desire to serve his new-found God and Saviour. Like many Christians, he will pray and seek the Lord’s leading. However, God’s leading is not always clear. Sometimes the compulsion to serve becomes a question of deciding between Christian vocation and a secular vocation. Does God want me to be a missionary or a carpenter? A pastor or a teacher? The decision becomes muddled when we have gifts that suit Christian ministry. “Teaching” is one of those muddling factors. Like a pastor, teachers spend their time learning and communicating knowledge to students. The teacher’s role is also “pastoral” in that he often counsels students and encourages them in character building and citizenship. Teachers are also generally “people-orientated” and they can be effective administrators.

This has been my struggle. Although I serve in the church doing “lay ministry,” I am a teacher and I wonder if I should be using the gifts God has given me as a pastor.

I have wrestled with this for many years. While a Bible College in Alberta, I was counselled by many profs and students to pursue a ministerial vocation. Yet I was not convinced that is what God would have me do. 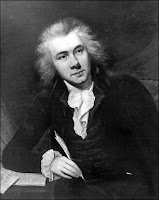 Recently, I was encouraged by reading the biography of William Wilberforce (Amazing Grace in the Life of William Wilberforce by John Piper). Wilberforce struggled with this same question after his conversion in his 20s. He asked, “Should I leave politics and take up a pastoral ministry?” Amazingly, John Newton, the famous hymn writer, pastor and acquaintance of Wilberforce answered his question with a resounding “No!” Newton encouraged Wilberforce to remain in his secular vocation, noting that God would use him in that capacity. God certainly did, by working through Wilberforce to end the slave trade and abolish slavery in the British Empire. Wilberforce also laboured for many other social and evangelical causes in his lifetime. Most significantly was his successful petition to end the British East India Company’s opposition to evangelizing India, which up to that point had been outlawed. For many years, the famous English missionary, William Carey, had been limited by the Company to minister in India only at a Danish colony near Calcutta, which was outside of the Company’s jurisdiction. Clearly, God had a use for Wilberforce in his secular vocation that had a profound impact on the world.

I was also encouraged by John the Baptist, who, instead of telling Tax Collectors and soldiers to change jobs, told them to do their secular jobs honestly and well (Luke 3:10-14).

A Call for Christian Teachers in Secular Schools

Although I am no Wilberforce, I am a teacher in a secular school. I meet daily with students and colleagues who are lost souls. Like other Christians in a secular environment, I strive to bear witness of Christ by my conduct and my example of integrity. Although I cannot overtly abuse my role as a teacher to proselytize, I am to teach my students to think “rightly” about the world. I actively fight against relativism and "scientism", teaching my students to seek “truth” and understand reality. Christian teachers ought to help their students discern a Christian worldview without necessarily calling it a Christian worldview. C.S. Lewis explains this need when he writes,

“If the intellectual climate is such that, when a man comes to the crisis at which he must either accept or reject Christ, [and if] his reason and imagination are not on the wrong side, then his conflict will be fought out under favourable conditions. Those who help to produce and spread such a climate are therefore doing useful work: and yet no such great matter after all. Their share is a modest one; and it is always possible that nothing---nothing whatever---may come of it. That does not mean we should put down the tools.”

Although I am not another William Carey or Charles Spurgeon, I labour for the kingdom, laying the foundation for Christian thinking, hoping that one day some of my students, when faced with a “crisis at which [they] must either accept or reject Christ,” will come to the right conclusions. If God calls me to another task, then to another task I will go. Until then, I am off to start another school year.
Posted by Jeremy W. Johnston at Wednesday, August 29, 2007 6 comments: 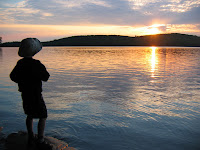 My son and I returned "up north" this summer to canoe the wilderness of Algonquin Provincial Park. This was our second canoe trip. Besides enjoying nature, seeing a beaver (!) and canoeing peaceful lake waters, I had a chance to be with my son. As he gets older (9 yrs!), I feel that my time to connect with him is rapidly fleeting. He is nearly a decade old and the years have flown by. In ten more years he may be moving out of the house, going to college or university, getting married, having babies...
Three days we were together, alone, camping and canoeing, breaking bread together, swimming, talking, reading. My prayer is that he will cherish these times. I know I will.

"Most of all, perhaps, we need intimate knowledge of the past... A man who has lived in many places is not likely to be deceived by the local errors of his native village; the scholar has lived in many times and is therefore in some degree immune from the great cataract of nonsense that pours from the press and the microphone of his own age."--C.S. Lewis, "Learning in War-Time" 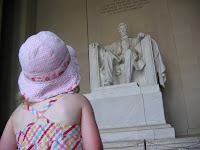 This summer, I took my family to Washington DC. What was remarkable was the rich history-laden symbolism that filled the capital of the United States. The founders of that great nation to the south not only celebrated their own history, but they borrowed from the history of humanity. The architecture incorporated aspects of many great human civilizations from the history of the world. These founding fathers knew their history and as a result established one of the greatest nations in the world. 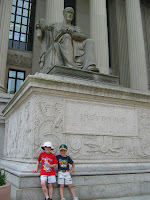 Above: the boys posing outside the National Archives (which houses the Declaration of Independence and the Constitution, among other things). The plaque states, "Study the Past."
Learning about the past is often deemed irrelevant. Why learn about the past when we have current issues to address. Owen Barfield, a friend of C.S. Lewis called this "chronological snobbery"... that the present is better than the past. When teaching history, I refer to it as "contemporary bias". When studying history, what we often discover is that the modern issues are no different than the historical issues. We also discover that the big issues we face today are sometimes small when viewed from the perspective of history.
C.S. Lewis writes,
“To study the past does indeed liberate us from the present, from the idols of our own market-place. But I think it liberates us from the past too. I think no class of men are less enslaved to the past than historians. The unhistorical are usually, without knowing it, enslaved to a fairly recent past.”
As Christians, we should be especially learning from Christian history and Christian biography. I just recently finished reading the biography of the 19th-Century American missionary Adoniram Judson. He was a real Christian, who faced countless trials and yet persevered in the Lord. I was convicted, encouraged and invigorated by his life and testimony. John Piper writes, "[Good biography] is also theology---the most powerful kind---because it burst forth from the lives of people like us. It is also adventure and suspense, for which we have a natural hunger. It is psychology and personal experience, which deepens our understanding of human nature (especially ourselves)."
Too many Christians are enslaved to a fairly recent past; I wonder how many church-goers would be offended if their church exchanged the drum kit for a pipe organ. Too many Christians lament about "easier times" in by-gone days. When I read about the society of Christian America and the churches in Judson's day (early 1800s), I couldn't help but see the same troubles and opposition we encounter today.
So Christian, study the past. Let us not be short sighted. Read about the saints. Be liberated.
Posted by Jeremy W. Johnston at Wednesday, August 22, 2007 2 comments: